Here she is: Siena – another eight-string tenor ukulele, this time made entirely of woods native to Germany: spruce, plum, maple, walnut and alder. The form is based on the Jenny.

There’s a story behind this uke that connects it with the Wana’ao – so check that page to find out more.  In any case, as a gift for my brother, it is blessed to be my first uke that makes it to the beautiful island of Kaua’i, where he lives,

For “play-in” I started with the Aquila Lavas in Lili’u tuning again. I liked them on the Wana’ao, although they did lose their punch and started to sound dull quite fast, so we’ll see how we do with them this time. I may change them before I send her off to Kaua’i.

So, as you can see, no tropical or otherwise endangered woods were used in the making of this instrument. It thereby earns the official North Sea Seal of Approval as an Ecolele >>> loud clapping and honking… “and thanks for all the fish”… 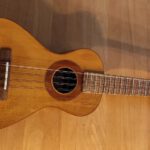 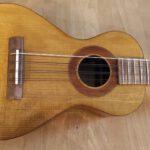 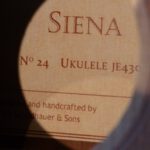 Close up of the label, through the soundhole, under the kitchen lights, with one hand 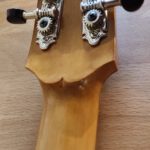 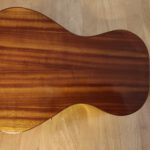 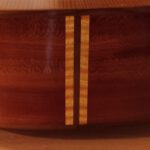 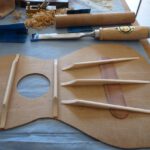 Not only does the color scheme go with the palette of golden, red and brown Siena colors, there are also a few “Easter Eggs” in the woodwork that are reminiscent of the city, its architecture, landscape, and so on – at least as they were  when I was there for a visit many years ago… See if you can find them.

** Please note that the signature on the label is not fully correct. I was planning to use plum for the bridge and actually had a plum bridge all ready to glue on, but there was a mishap with drilling the string holes in it (bit broke off in the hole). So I decided to use walnut for the bridge instead. I’ve used plum bridges before and would have preferred it, but I think the walnut looks really nice and it sounds fine, so no issues except that the signature says: … Al Mp Pl …  So be it.