A few years ago, I was involved in a project at Ukulele Undergroud called the Fun Build. The idea was that different members of the builders forum would collaborate to build ukes together for a good cause. The first build (Fun Build 2010) was completed successfully and awarded by Ukulele Undergroud as the prize for a “Best Video” contest.

The second build (Fun Build 2011) got off to a good start, but unfortunately there were a couple of pieces that no one volonteered to make – I believe we were short a nut and bridge and maybe also a fretboard. Anyway, time went by, people moved on to do other things…. and the build was never completed. For this build, I had been asked to make the top and ended up completing it some time that summer. Another member of the team, Brad, collected all the parts from the various builders and would have been the one to also do the final assembly.  But, as I said, that never actutally happened.

So, some time later, I talked to Brad and asked him if he might send the top back to me – which he did. The original plan was for a concert scale pineapple uke according to the Scott Antes plans. I had already made a pinapple uke based on those plans, so I decided to do something else with it. After some careful design adjustments I managed to modify the top for use on a boat paddle uke. The original scale length was about 380 mm, which I increased to 410 mm in order to have the neck/body joint at the 14th fret, because I prefer a boat paddle with a longer “handle”.

And here are the specs: 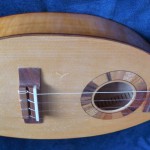 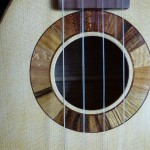 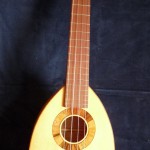 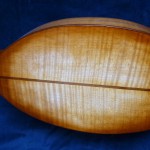 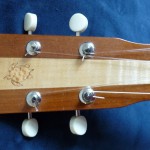