Finished french polishing yesterday. All that’s left to do is assemble all the pieces and solder the pickup wires to the switch – but we have to wait at least four weeks, maybe six, for the polish to cure and harden before we can do the final assembly. In the meantime, we’ll be working on June – and on another new instrument.

A lot has happened since my last update – in fact I’ve even had her with pieces together (without the electronics) and strings on to check the action. The string height seemed a little high to me, so I added a little 1 mm shim under the end of the neck tenon. That helped quite a lot – I may even be able to take it down to 0.75 mm or even less. We’ll see.

The neck now has two coats of siccating linseed oil on it, which not only brings out the grain and figure of the wood but also darkens it quite a bit. Our plan was to put shellac on after the oil has dried completely, but I may reconsider.

There are a couple of steps left to do, but really just minor stuff like adding side dots to the fretboard and drilling the screw holes for the cable jack. Then comes the finishing process, which always takes much longer than you would expect, and of course the curing, which takes even longer. So is it, so be it…

The ukulele body hanging in the window, by the way, is not new – it’s No. 15 (Pauline). We took her out recently and found that the top had taken a lot of wear and could do well with a refinish. The extra light from the window helps cure the shellac. 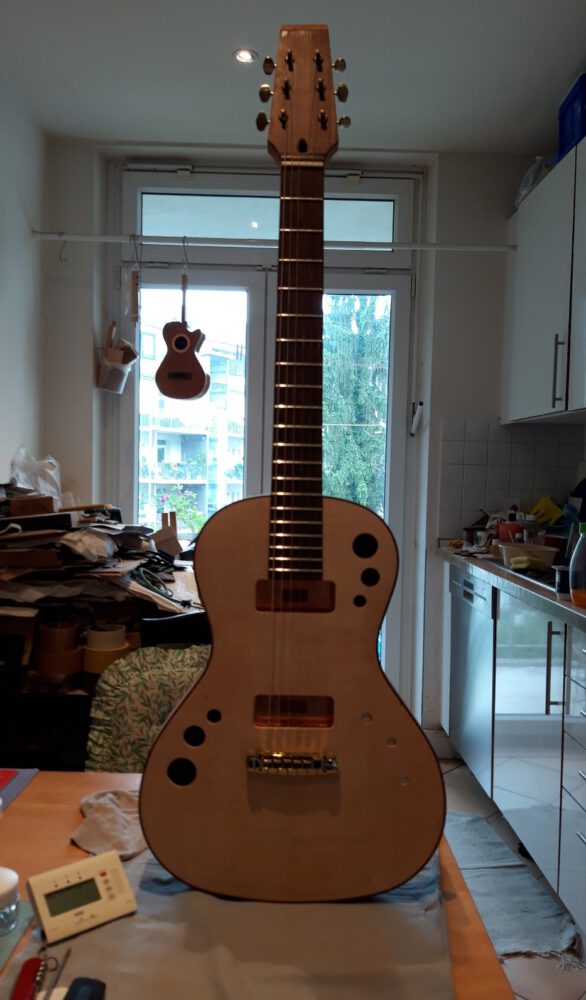 Last steps before gluing the fretboard to the neck: 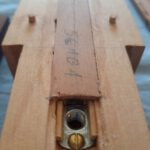 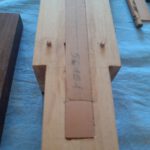 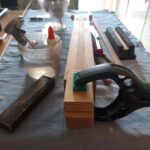 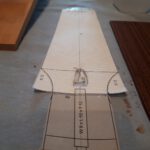 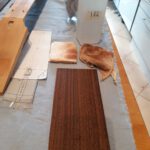 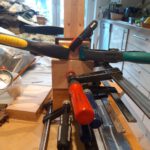 I put the neck bolt in yesterday. That means the neck joint and fretboard position are final and I can now mark the bridge position and drill the stud holes.

I used a screw-on nut for the neck joint. After shaving away at the neck for so long there wasn’t enough room left for the bolt plate, so I had to cut it off at one end. Even so it’s practically flush with the end of the truss rod. 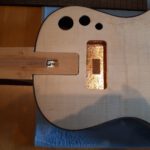 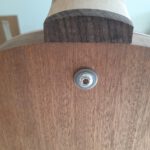 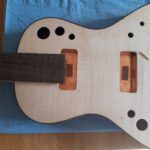 I’ve been working on the neck lately and it’s almost completed now. I can’t really do anything on the body until the shape and positioning of the neck and fretboard is final. The reasoning behind this is that the exact bridge position depends on the neck/fretboard position and angle. Currently, the back is still flat and want it to stay that way until I can drill the stud holes for the bridge.

After seeing how helpful it was to have matching dowels and holes to position the top on the body for gluing I decided to do the same for the fretboard/neck joint. First clamped the fretboard in place on the neck based on the markings I had made. Then I drilled holes at the 1st and 13th fret, one on each side, using a 0.8 mm bit in my little watchmaker’s hand drill to mark matching positions for the 3 mm holes in the bottom of the fretboard and the surface of the neck.

I used a 3 mm beechwood rod and cut off four 5 mm pieces for dowels. Adjusted the dowels and holes so that everything fit just right and then glued the dowels into the holes in the neck. On the fretboard I covered the area around the holes with pieces of cellophane tape and pressed the fretboard into place to ensure that the dowels match exactly. That worked fine, so now the FB fits exactly on the neck and just needs to be glued down. … … …  Thinking back, it might have been smarter to wait until the neck is really final and then glue the dowels in. Oh well, lesson learned. I think it will be fine. For shaping, sanding etc. I can just put the FB on if I need to clamp the neck flat on the table. 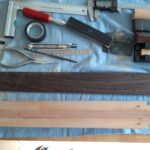 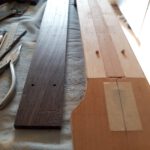 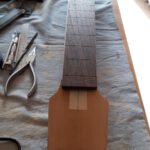 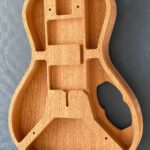 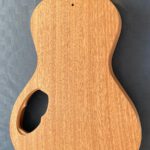 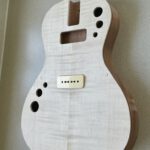 Our CNC partner Klaus did a test run of the routing plans with a piece of MDF for the body and wood of some kind, possibly birch ply, for the top. Here are a couple of pictures he sent me. 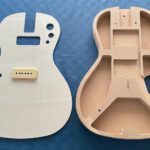 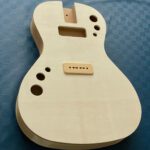 Note that we decided to go back to the original oval-shaped cover for the electronics cavity because the original Gibson LP covers are unavailable and the “copies” we got from various sources differed considerably from the official Gibson dimension plan we received so that none of them actually fit our trial route-out correctly. So we’re going to make the covers ourselves (with Klaus’s help).

There have been quite a few, albeit minor, updates and changes since January, so the plans look a little different now.

Note: We purchased several LP-style covers for the e-cavity but determined that the exact dimensions and placement of the screw holes were different on each one, and all of them differed slightly from the Gibson plan. At the time, it was not possible to source an original Gibson cover, not even at gibson.com, so … … … we decided to go with the elliptical cover based on our original plan/design.

The Lollar P90s unfortunately do not have standard sized covers, so we had to make the slots bigger. I’m not really happy with that change, but I wonder if anyone will ever really want to exchange the pickups. I hope not.

The e-parlor is coming along, slowly but surely. Sapele body blank and maple drop top are ready for routing and already at our CNC partner location. 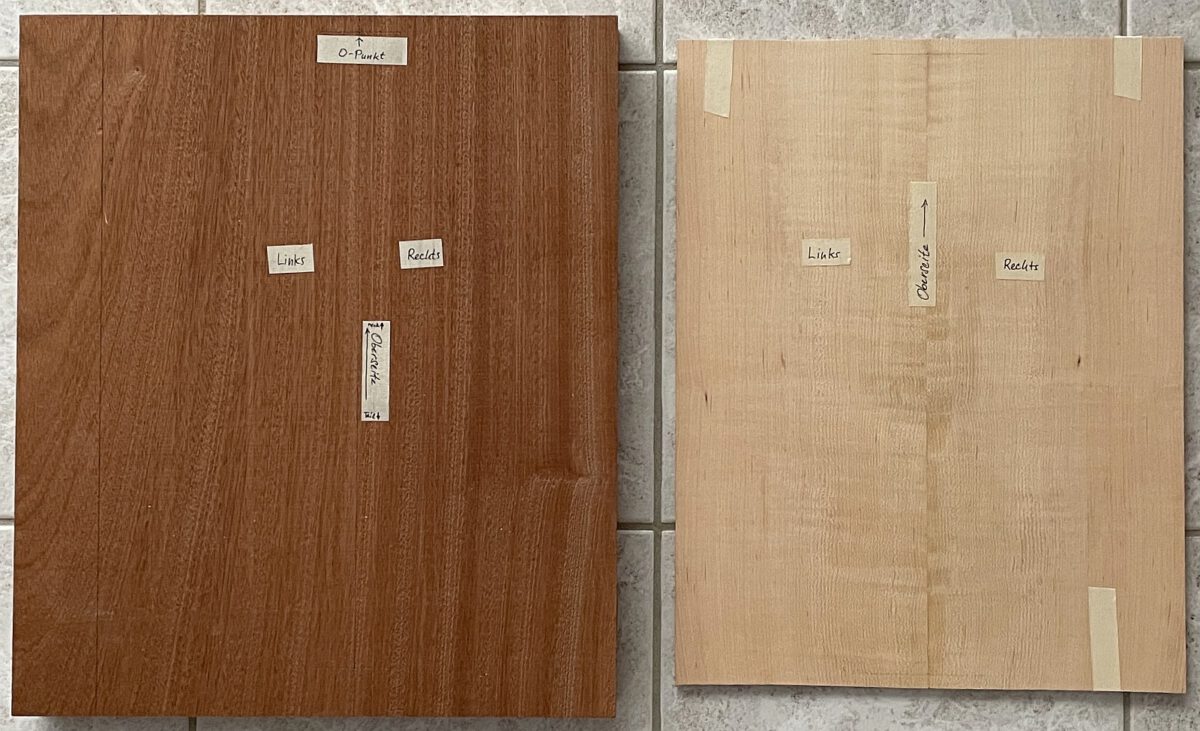 The CNC plans are almost complete, just a few details and adjustments left to do. 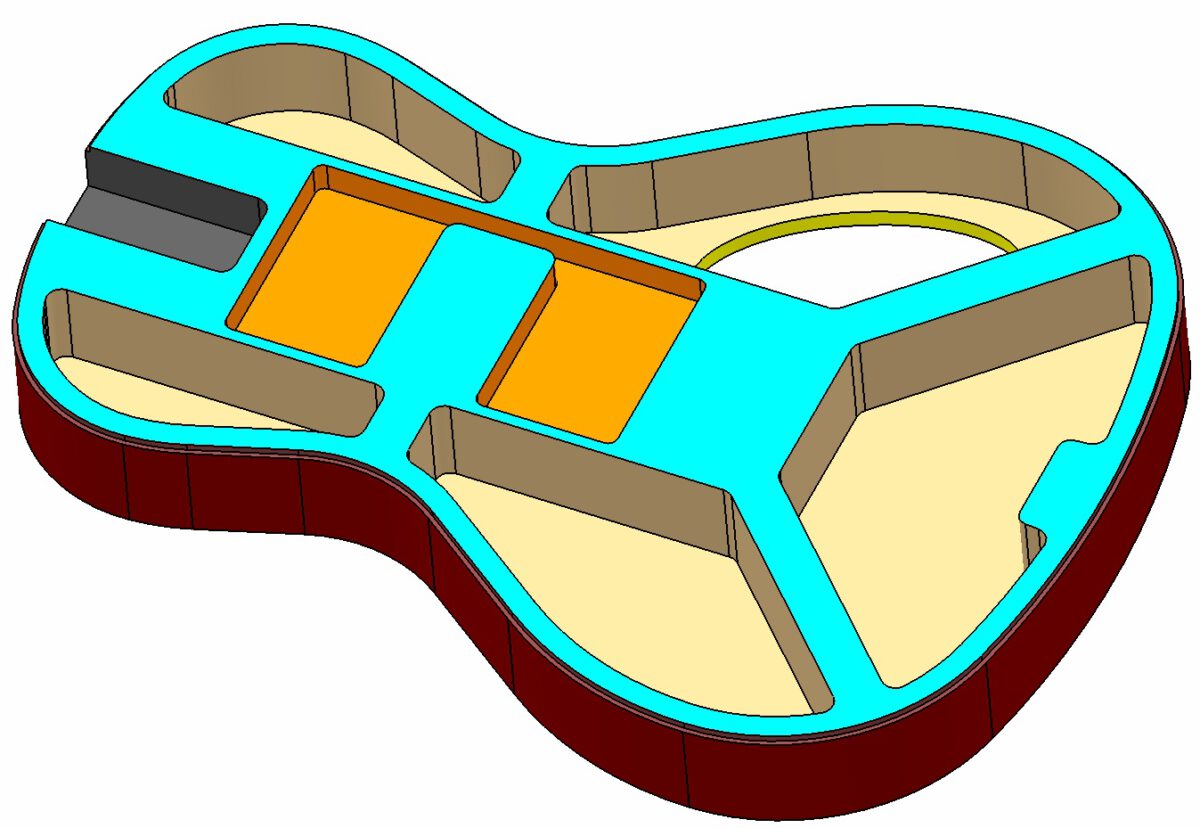 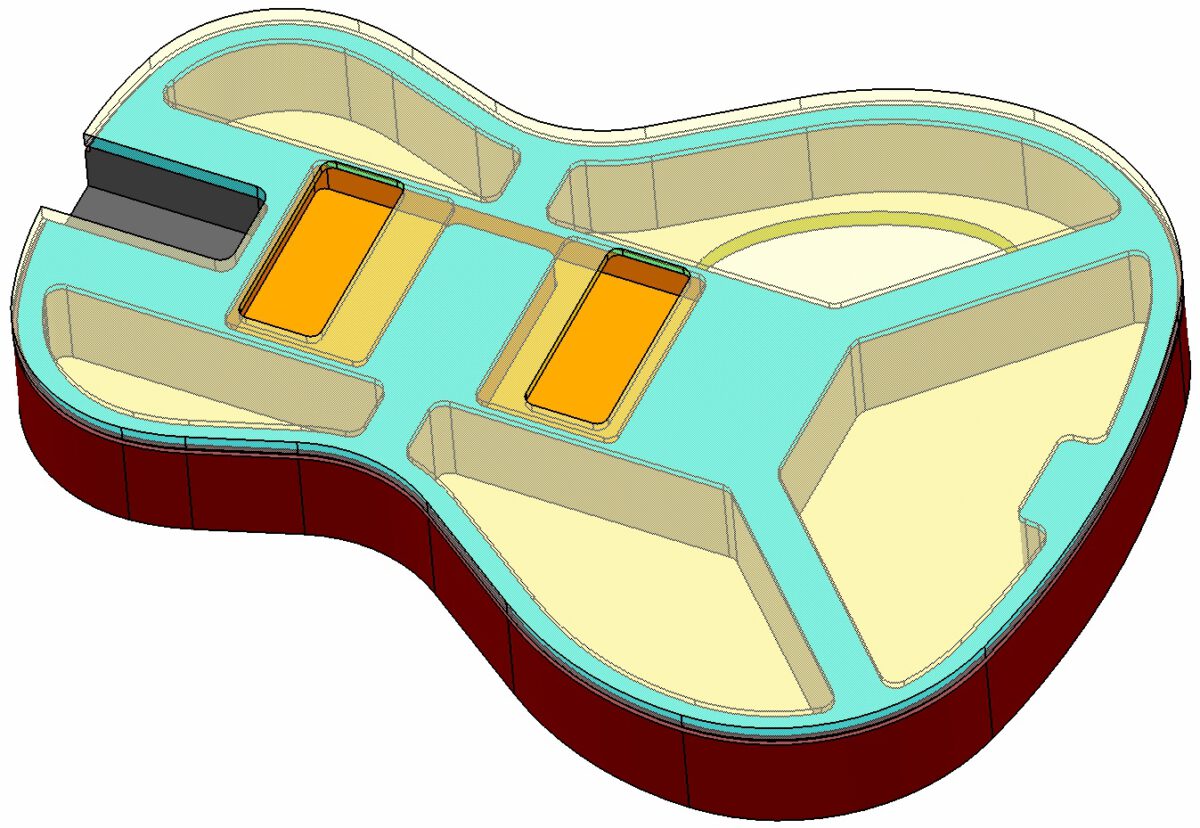 This is a semi-hollow electric guitar based on the June form. Planned scale length is 630 mm but we may go with Gibson style 628ish. The body will be a chambered piece of solid mahogany, the top is a nice bookmatched set of solid flamed maple, not master grade, but still very pretty. As pickups we’re planning to use a set of Lollar P90s.

Here is an approximation of what it could look like. Note that this is not the maple set that we got, just a random flamed maple image. 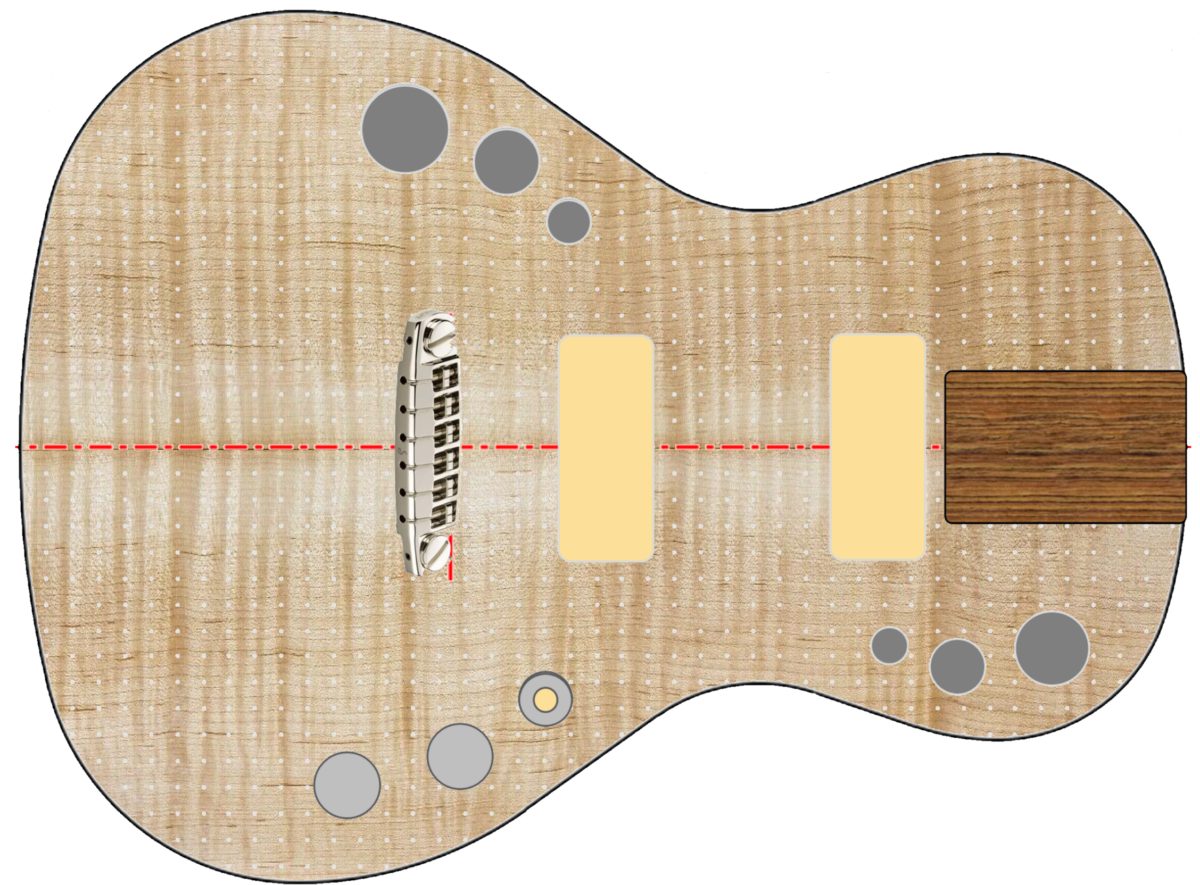